In the first part of this blog post, I shared some fundamental ideas that form as background information for what I want to achieve here. So if you haven’t read that one yet, I recommend you to check it out.

A few months back, I decided to convert my hobby project — Hackathon Planner API from pure Javascript to TypeScript and wrote a blog post about it. This time I sat down to build an Automated Test Suite and a Continuous Delivery (CD) pipeline around it.

Effective automated testing is a natural prerequisite for Continuous Integration & Delivery. How can it not be? If you’re not getting quick and broad feedback from your software, how can you delivery frequently? So having a testable architecture and an effective test strategy is very crucial. Let’s dive in.

I’m a huge fan of subcutaneous testing. This type of testing starts right under the UI layer with a large scope (which preferably spans all the way down to the data store) can have a great return on investment. On Kent Beck’s feedback chart it would score high up and to the right: fast and broad feedback.

So now that we want to target our automated tests below the delivery mechanism layer (UI, Network etc.), this is where an important architectural decision comes into question. What is the main boundary of my application? Where does my significant business logic start? Plus, how can I make my application boundary very visible and clear to all developers? If you follow down this path of thinking, one nice place to end up is a combination of command and mediator patterns.

The combination of these patterns is about sending commands down through a very narrow facade, where every command has a very clean input and output “data transfer objects” or POCO’s, POJO’s.. whatever you like to call them depending on your stack of choice. They’re simply objects that carry data and no behavior.

To be able to use this pattern in my REST API, I’ve created a simple module in TypeScript that allows me to execute commands and optionally get results from them. It’s here: TypeScriptCommandPattern.

In the example below, you can see how a test request is sent down to the executor and a result is returned back.

And here is how a “Hello World” style command handler looks like. Notice that it has a clean request and response definitions. At the end of the implementation we make sure that the handler is registered and mapped to the request. In this structure handlers are singleton objects and they can later be resolved by the type of the request and then get executed.

Using this pattern in a real world Node.js REST API

One great architectural benefit of this pattern is that it allows you to nicely separate an application into many independent scenarios — vertical slices. Take a look at these scenarios from Hackathon Planner: 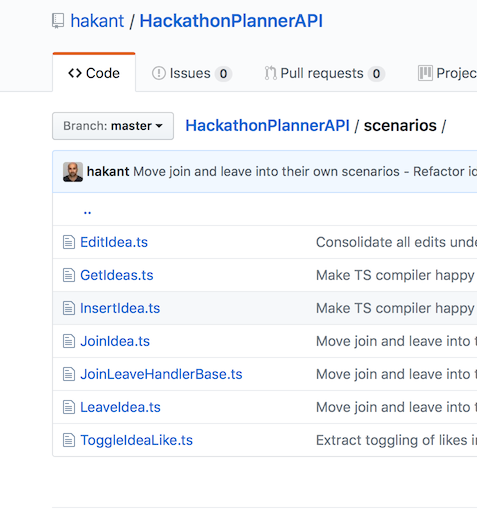 Each of these TypeScript modules are a vertical slice. They’re the full story. Yes they make use of other external modules when necessary, but when developers read through these scenarios, they get the full picture. And if code sharing between these scenarios are done wisely (with correct abstractions), then a change in one scenario is contained and does not necessarily affect any others.

Let’s take a look at the implementation of one of these scenarios and extract some key properties. Let’s pick the scenario in “GetIdeas.ts”:

If you have experience with building MVC type web applications or REST API’s you’re probably familiar with the idea of controllers. Routes are the same concept in ExpressJS. Keeping your routes and controllers nice and clean is a good discipline to have. Remember, we want to contain our core application logic and try not to leak it outside as much as possible. Not to frameworks, not to external libraries.

Hackathon Planner’s most significant route is the Ideas route where ideas are being CRUD and a few further actions are taken against them. Code below shows the routes defined in there. Notice how clean it reads and how all business logic is kept out of it. The only thing these routes do is to pass requests and responses up and down the stream.

Testing all the Scenarios

The structure of the software created so far lends itself nicely to the subcutaneous testing style discussed earlier. So I take advantage of this by taking the following actions in the tests:

Let’s take a look at a few of these tests. Below is a part of jasmine spec that tests inserting and fetching ideas by running several scenarios.

Here are a few key properties of these tests:

In next and the last part of this series, I would like to write a few things about my experience with setting up a CD pipeline using CircleCI, which transpiles all TypeScript files, installs dependencies, runs tests and deploys to AWS Elastic Beanstalk.