In my previous post I'd talked about my plans in NDC Oslo, including all the sessions and the 2-day workshop I was planning to attend.

It's been a great experience. I came back with good memories and learned a few things too. NDC conferences usually feature high quality content and good speakers, this one also lived up to the expectations.

I would like to share some of the highlights of the conference which, of course, are based on my perspective and interests. 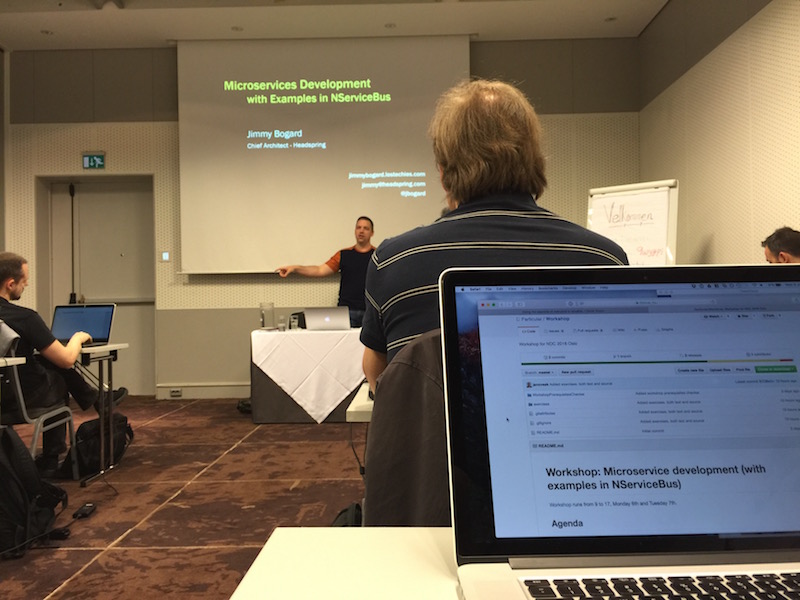 Jimmy Bogard and two employees from Particular Software ran the workshop. As it happens with all these type of workshops, nearly half of the content was sort of a beginner to intermediate level while the other half was covering more advanced and interesting scenarios. Here are some of my highlights: 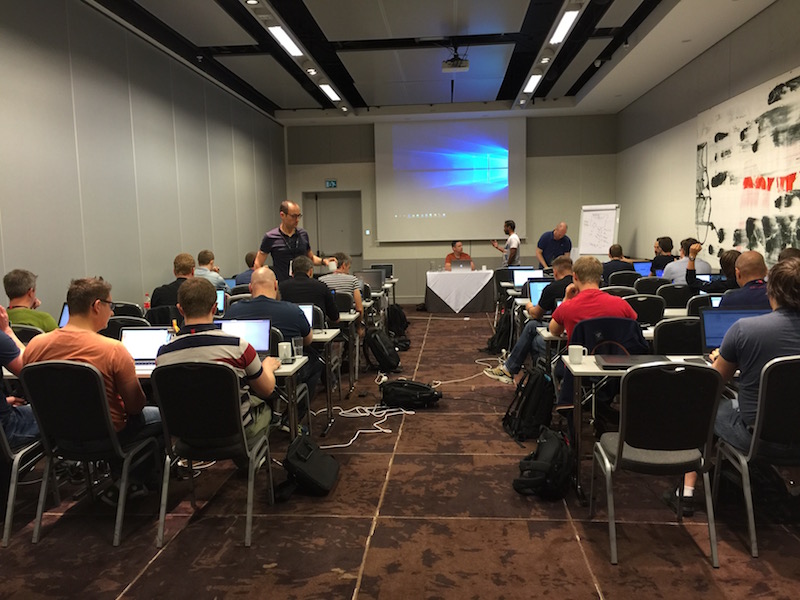 
Erlang is cool, so is functional programming!

Functional programming was a large and popular track in NDC Oslo. Created a lot of buzz for sure. This photo below was taken at the end of conference day one. I believe at the end of the conference #fsharp, #erlang, #phoenix and #elixir were all sitting high in this top 10 list as some of the most spoken technologies. 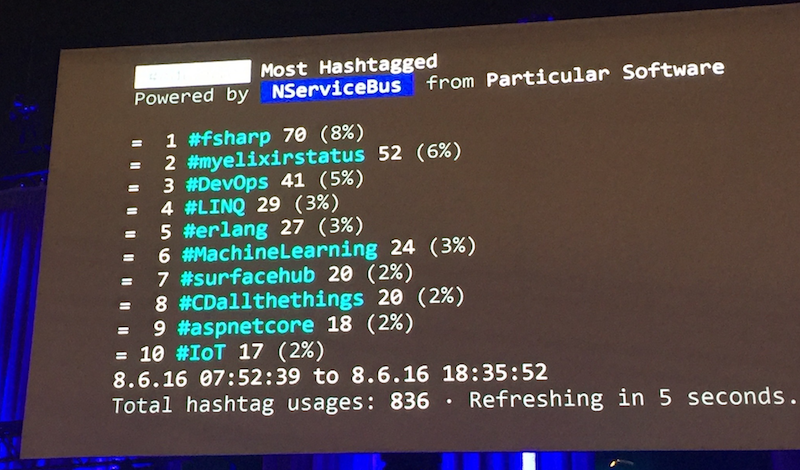 I met Erlang for the first time and found it quite interesting. In Wikipedia, Erlang is described as:

Erlang is a general-purpose, concurrent, functional programming language. It is also a garbage-collected runtime system.
Erlang is known for its designs that are well suited for systems with the following characteristics:

Do any of these sound familiar? Welcome to the cutting edge stateful microservices technology, from 1986!

Lightweight processes are the main building blocks of an Erlang application:

Based on my first impressions I found many conceptual similarities between Erlang and Service Fabric: the idea of stateful and stateless services messaging each other. Erlang doesn't have the concept of replicas (unlike Service Fabric), all process nodes are peers - no primary & secondary relationship. Which means if a process crashes the state is gone. Of course there are solutions to this - like Mnesia.

My gut feeling after learning more about #erlang in #ndcoslo : #servicefabric is #erlang plus some (large) churn.I still love #csharp though

I think I'll be looking into Erlang, Phoenix and Elixir because I'm sold to the idea that these things are pretty powerful to ignore.

Head to head session with questions from Stack Overflow 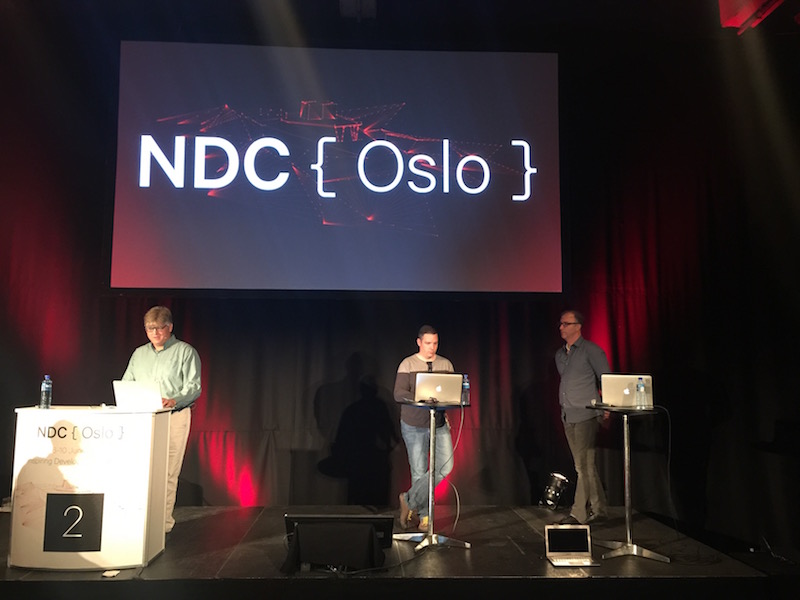 Both Scott Allen and Jimmy Bogard are proponents of testing with less mocking. Jimmy said he doesn't like using in memory database tricks or any other unrealistic testing styles. A few tricks that he spoke of were:

.NET Core is shaping up nicely 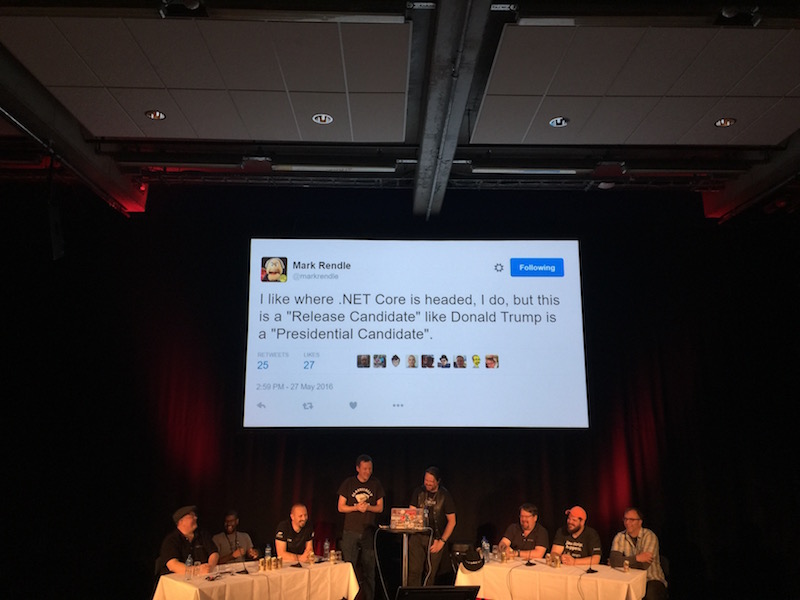 ASP.NET Core looks beautiful even though the roadmap had its fair share of ups and downs for a long period. The talk about making the Kestrel web server performant is fantastic. It turns out that creating a very performant web server takes ridiculous amount of code optimizations. Must watch. Actually most .NET Core talks were very interesting. 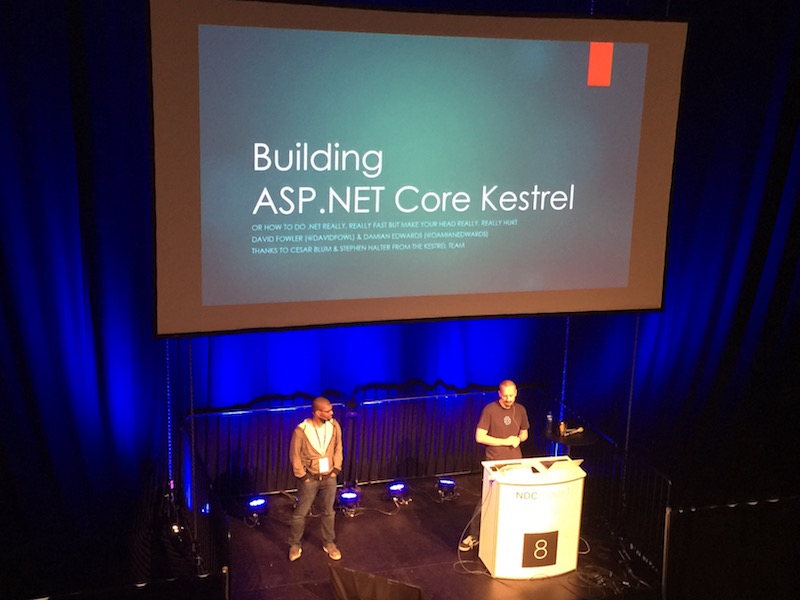 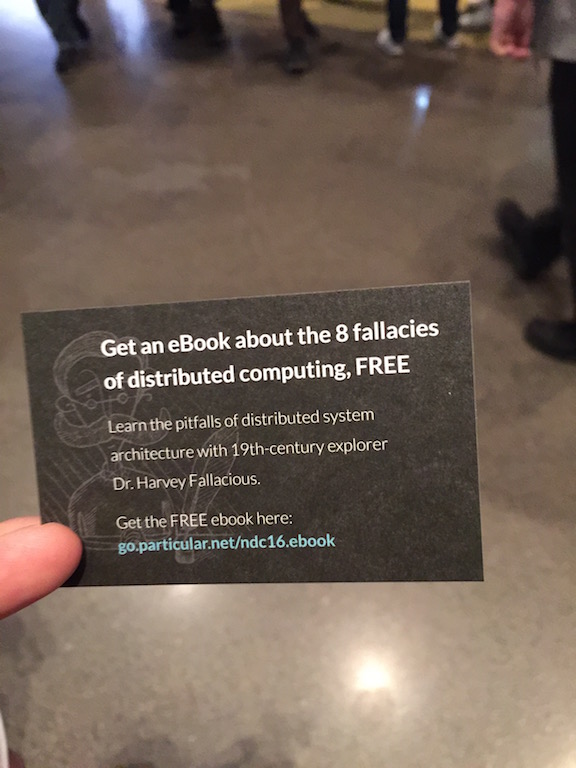 Nice resources from the talk "Escaping the Big Ball of Mud": 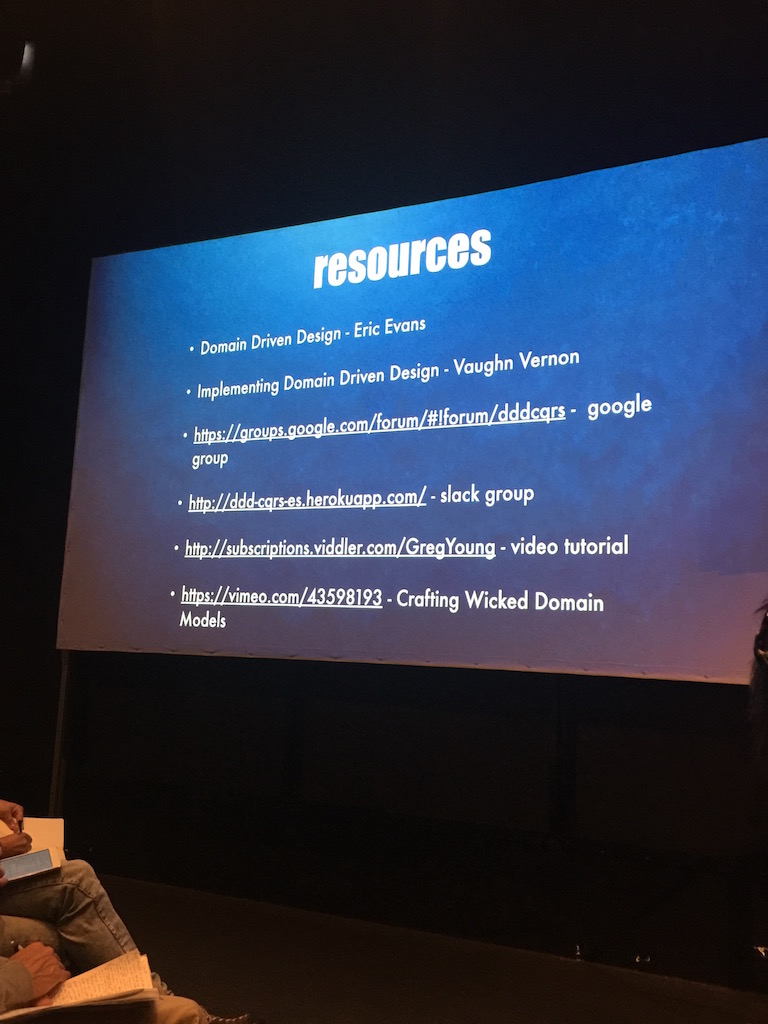 FAQ slide from the talk "Scale up and out with Akka.NET": 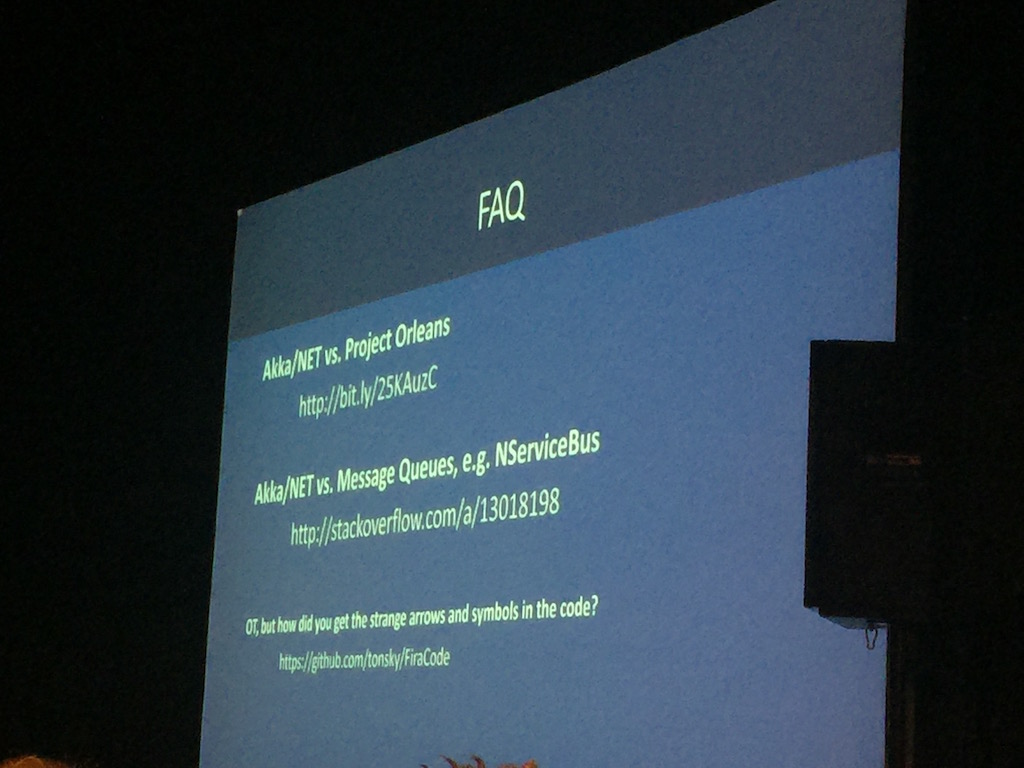 This BB-8 droid from Star Wars could be controlled via a tablet. I tried and miserably failed against the challenging track. 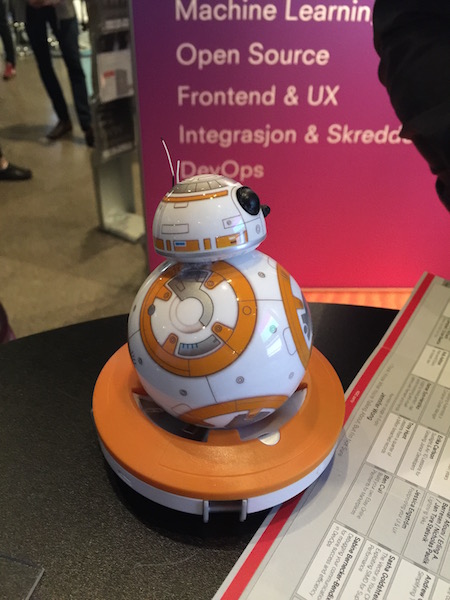 My frequent stop. These guys were serving top class coffee: 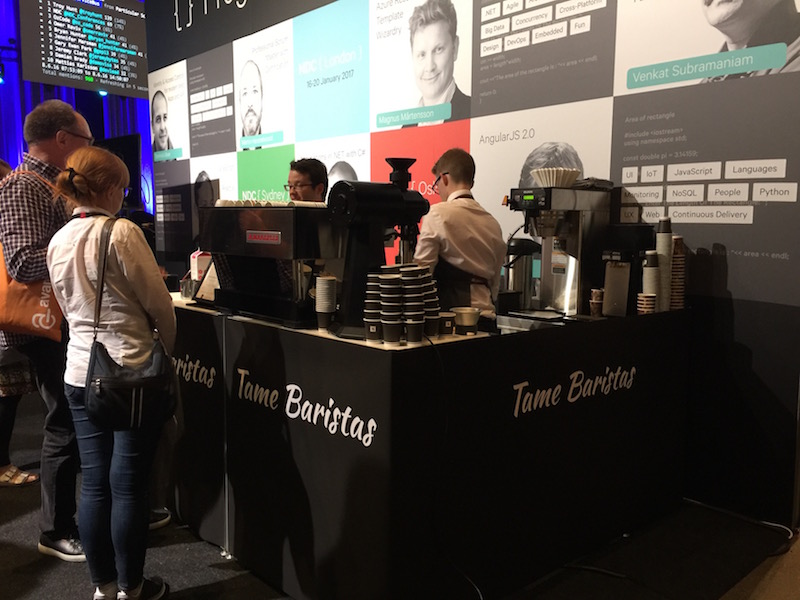 That's all I've got for now. Thanks for reading.